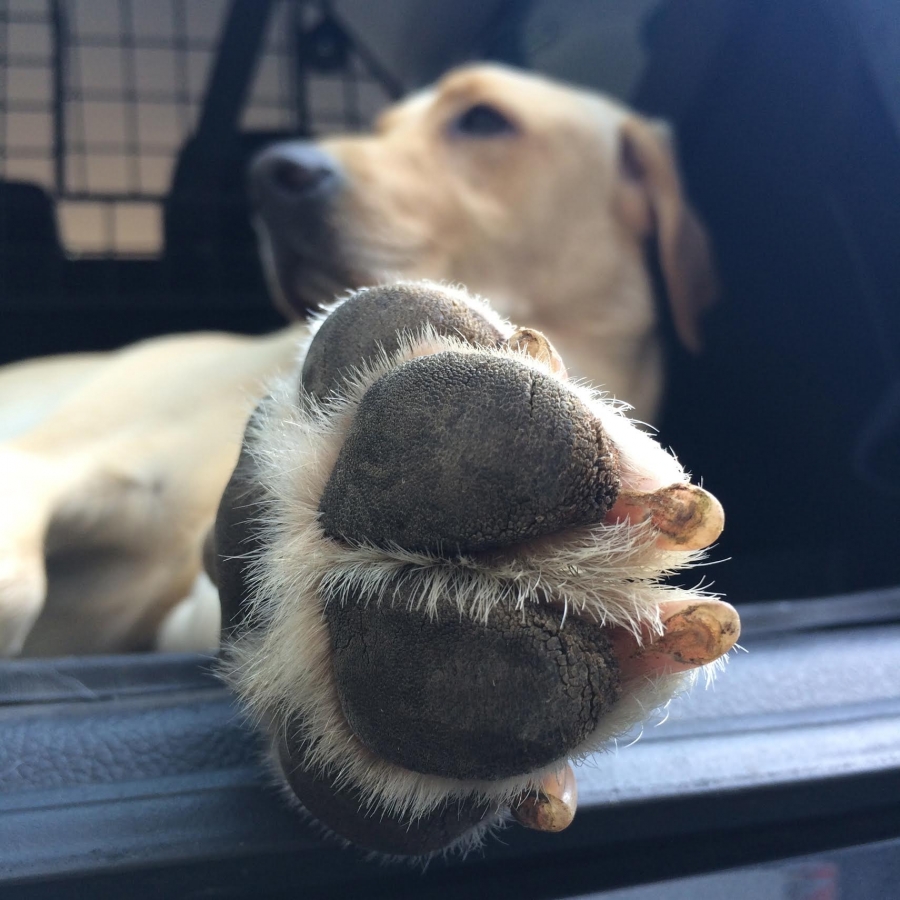 Welcome to the second and final part of Mindful, with Dog, a thoughtful and reflective piece by American writer and editor of Penduline Press, Bonnie Ditlevsen, about her experiences of being mindful with her dog Chewbacca (Chewy) and her camera.

Bonnie Ditlevsen is a parent to two boys and a dog. She studies Renaissance and Baroque vocal music and performs regularly as a soprano with the Bach Cantata Choir and the Trinity Choir in Portland, Oregon. In her free time she volunteers at an animal rescue organization. 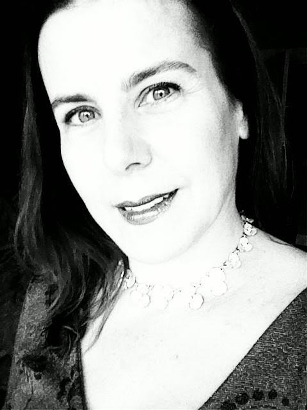 My dog has grown from 15 pounds to a whopping 75. I hear that Labradors eventually mellow out by age 3, most definitely by 4 or 5. It all seems like a very long time from today.

Serenity NOW! one friend teases. It's clear I haven't calmed or centered my life any by trying to raise a puppy. Having two boys in a row also didn't do much for my serenity. It's hard to clear one's mind in a sleep-deprived state, or while a child is being reckless at the dinner table, or while a Labrador is being X-rayed for the possibility of pieces of garden hose in his stomach. I sometimes think about the Sisyphean aspects of my daily life, but decide that Sisyphus would definitely have been less frazzled. He didn't have to contend with the many parameters and variables that I do. 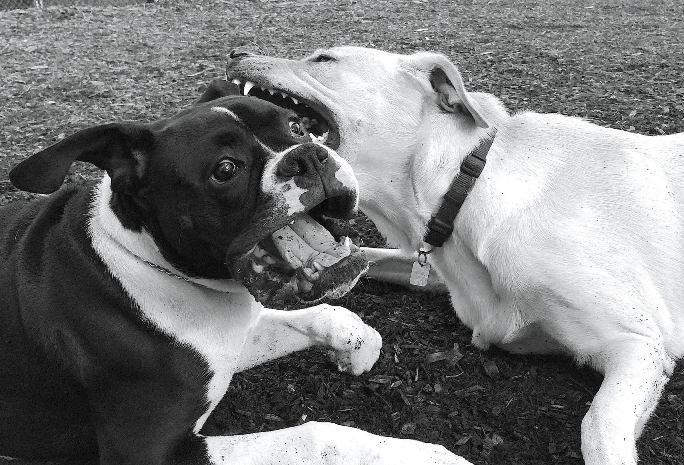 Age 2 has come and gone, and though Chewy leaves our shoes and computer wires alone, he still torments my son's wooden bed frame, so I simply get rid of it. Someone at the furniture upcycling place will see it, shake their head, then bust out the wood putty and blue paint to give it new life. Me, I've decided to let it go and move on, thinking more abstractly about the temporal nature of things--puppy teeth, seasons, the evaporating childhoods of my kids. It won't be long before they're fully grown and on their own. Chewy will still need me, though. Is this ultimately why I decided to heed my son's Christmas wish list and get a dog? Sure, it was for my son and for us as a family, but wasn't it, deep down inside, more for me? 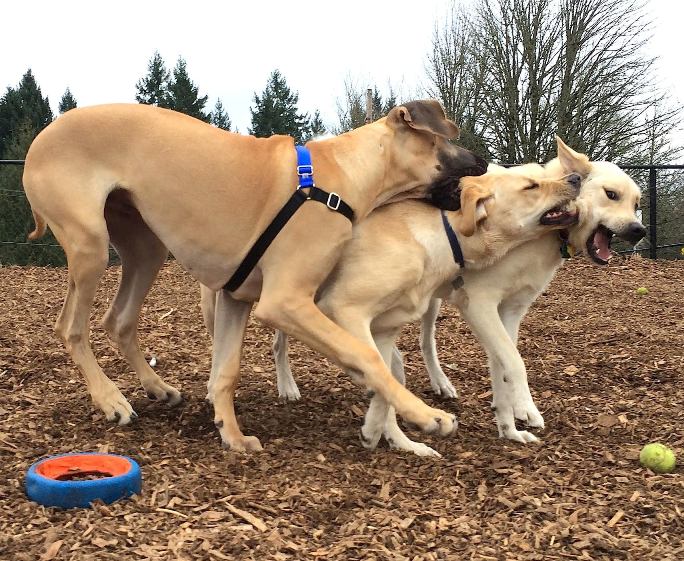 I read archaeology news, fossil evidence of how humans have had canines as companions, hunters, and guards for over 30,000 years. Dogs adapted themselves to read the faces and emotions of their human keepers. They developed an unusually profound degree of loyalty. It is only much more recently that dogs have been brought indoors, coddled, and regarded as actual members of the family. I ask myself: in getting Chewy, was I perhaps also tapping into some sort of ancient genetic residue from those many thousands of years of human-canine bonded tradition? Or was it for his steady and unconditional love, the kind teenagers tend to demonstrate less of to their parents as they ready themselves for the wider world? 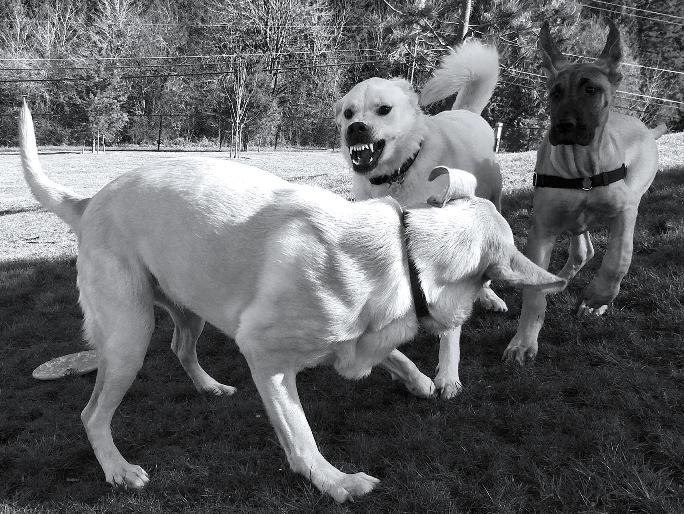 Chewy is over by the sliding glass door all Sphinx-like, gazing out at the yard and the birds flitting around in the trees. There is no concept in his head of a tomorrow. I am thinking about bills, tax forms, the spring cleaning to-do list, someone's upcoming birthday. Will I be ready for all of it? I think back to the job I used to have, how I ought to have studied something else, how different my thirties could have been had I not chosen the field I did. My nail beds and the furrow in my brow reflect all of these anxieties. But Chewy's stressors go in via his senses and right back out again: up go his hackles, and a deep, resonant baritone bark signals his immediate concerns. I might dismiss them as nonsense--no, the postman does not want to murder our family, and neither does that school bus full of children--but they're not nonsense to him, and truly, I envy how quickly Chewy can vent his anguish, how vociferously he can express himself. "Quit your nonsense!" I chide, as he glares out our front window. But weren't some of my own past conflicts and anguish, in retrospect, ultimately all over nonsense? Nonsensical problems caused by nonsensical people around me whom I no longer waste my time thinking about? I wish I'd had, and used, a booming baritone bark on them back in those days. What a remarkable boundary setter it might have been. 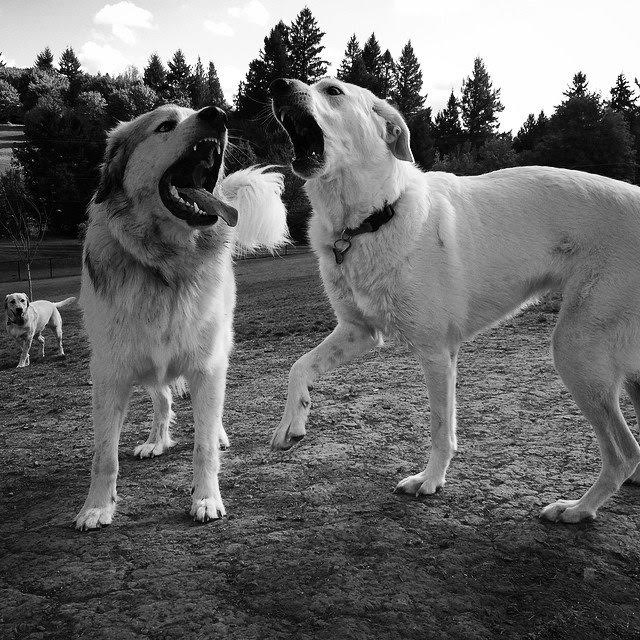 I'm home one day and the phone rings. "Ms. Ditlevsen?" a man says. "I'm with Animal Control? I have your dog? Chewy?" "No," I assure him. "That's not possible. He's home with me right now, in my back yard." But he isn't. Instead, there is a long, deep, Labrador-sized hole that's been dug with impunity under my six-foot privacy fence. Minutes later, the man pulls up diagonally in a little white van. Chewy had run uphill for a couple of miles before inviting himself into the home of some woman walking her large-breed dog. "She called, and he's in the system now," the man cautions, showing me the screen of his work laptop. Chewy, County Juvenile Offender, now has a profile. That afternoon, my sons help me to unload heavy basalt boulders purchased from the local quarry. We are Sisyphus, only carrying the boulders down the hill. Chewy sniffs ominously at the places where the basalt ends and regular (read: diggable) soil resumes. The irony of life is not lost on me when, in the evening, Escape from Alcatraz is on television. 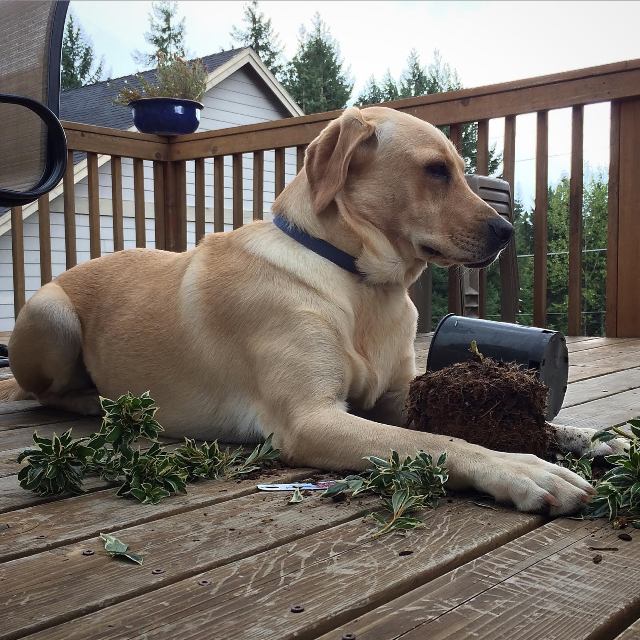 Humans have kept dogs off leash for many centuries as helpers and companions. Surely, our modern situation of leash laws and bored, unwalked pets confined in the home is a weird twist on the vastly longer canine-human history of relative outdoor liberty. Today's dogs are often understimulated and restless, some becoming depressed, lethargic and overweight. Others…chew. "That's what you get for naming him Chewy," a friend once told me. "I know," I said. "I should have named him Gandhi. Or Mandela."

People changed, too, once industrialization and modern technologies created the huge sector of sedentary jobs in place today, and the modernization of housing (including reliable electrical service and plumbing) made us no longer need to haul water or chop wood. We are not unlike modern canine pets without jobs. Psychologists report that people today suffer from unprecedented levels of depression, obesity, boredom and anxiety. I relate to Chewy's manifested boredom for this reason; I feel bad about the safe yet dull, solitary and confined "now" I am providing for my dog. Thirty-two years ago, our family dog, a mutt, used to exit the back screen door to roam the neighborhood for the entire day, or however long it suited her. Today if I did that, I'd be the Queen Of Little White Dogcatcher Van Visits for my irresponsibility, and I'd be broke, too, from paying the huge fines. [Today, I'd also get the sideways eye from dog park friends for daring to utter the word "mutt." It's known as "mix," thank you very much.]

I can't take Chewy for enough walks and dog park visits with my overloaded schedule, so I decide I will pay for regular doggie daycare for him, five partial days per week, so that I can work and run errands and ferry kids to music rehearsals and sports. Though there were boarding kennels, I can't recall there being any doggie daycare centers 32 years ago. Today's city-ordinanced, leashed, microchipped dog is less Tom Sawyer/Huck Finn, and much more like a human preschooler of working parents. The daycare center is great, though. It's a wonderful happy medium. It offers kiddie pools to soak in, snacks, toys, and most importantly, other large-breed friends who want to hack around for hours in a controlled setting. 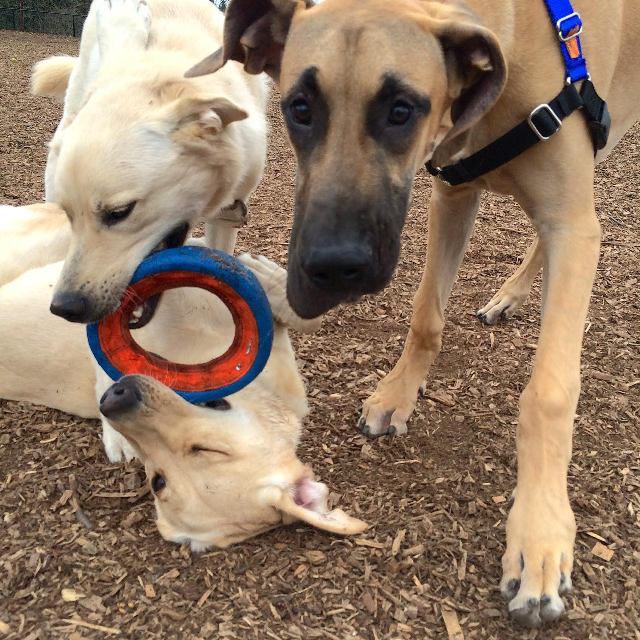 Chewy (and Me) in the Now

I have accepted that I'm a less than perfect dog owner. Somehow, the humility that goes with that acceptance feels very centering. I was really great at some jobs I held in the past, less so in some others. In my life I've been a loyal friend to most, yet regrettably, became distant or disconnected from some. Human nature and dog nature--our behavioral traits and theirs--often go hand in hand, yet Chewy and his dog park friends have shown me that we are by far the more contradictory and more unnecessarily complicated species.

I watch him through the lens of my camera as he greets, sizes up, then initiates play with a new dog. To him, every dog is a dog he might want to play with. I think about how I have been at initiating new friendships, and also cultivating my existing ones. Have I demonstrated Chewy's zeal, his ongoing curiosity to seek out those who are different? Have I wagged my tail enough when seeing my good friends? Or have I become more indifferent to others, more passive and complacent, surrounded by my comfortable four walls and limitless screen time, my thoughts always flashing back or flashing forward? 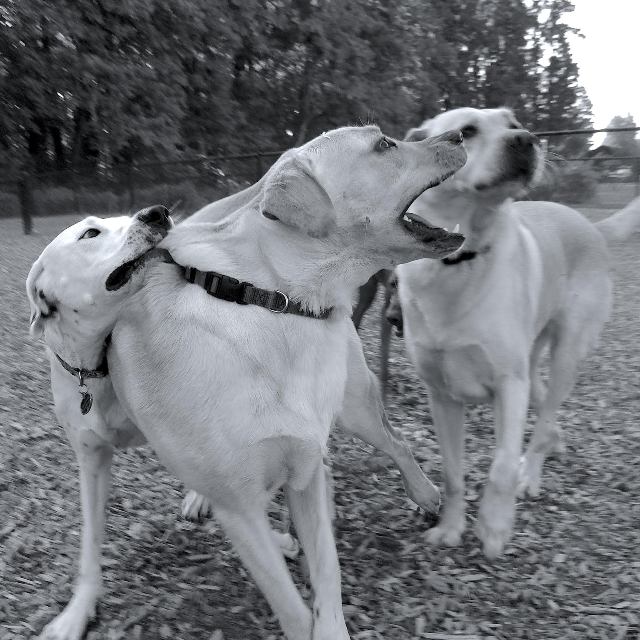 Chewy saw that I was busy at my computer today, and went outside by himself. Later on I noticed dirt on his paws; sure enough, he'd dug a fresh hole, this time between the corner of the fence and the valves and pipes of my in-ground sprinkler system. He brings me this way into the now, my dog. I stop what I am working on and grab a rake and shovel and heavy gloves from the garage. Time for more hole repair, and to see if he hasn't messed up the yard's irrigation. I've been composing all sorts of lovely sentences about dogs, devotion, mindfulness, and so forth, but right now, I'm ready to ship this yellow four-legged freak off to Siberian dog camp. I breathe in, take a moment to size up my frustration, anger, and Sisyphean misery. Breathe out, and it's just a hole in the ground which I can fill, important because through it, he's telling me Hey, Human-Lady! I'm here! Throw me a tennis ball or something! Anything. Or at least take me to my daycare. You've been writing an article about dog ownership while completely ignoring your dog.

I go to him once the yard is finished and we are both inside. He looks regal on the large ottoman, and cranes his neck as I scratch the area underneath where the collar sits. "Handsome puppy," I tell him. And he is. He's nothing if not sweet, maddeningly clever, and so very handsome.

You can find Bonnie at Penduline Press.

More in this category: « Mindful, with Dog (part I) by Bonnie Ditlevsen The Well that Ran Dry »