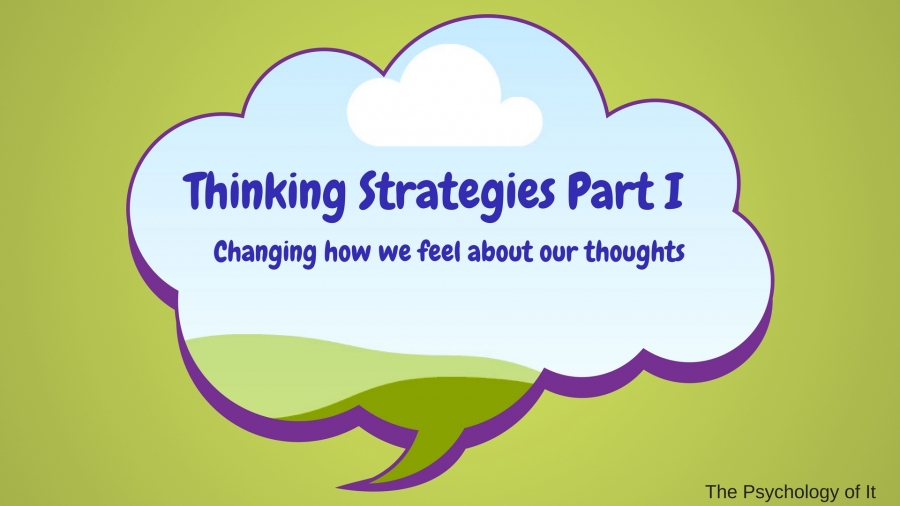 Today in the Coping Toolkit, I'm going to teach you five of my favourite, very quick, very effective thinking strategies to help prevent your unhelpful thoughts from making you feel like crap.

First, a quick recap of the ABC Model to explain the very close connection between what we think and what we feel.

Generally speaking, we have a situation - the A (an activating event) - followed by our thought/perception - the B (belief) - which then tends to influence our feelings - the C (consequence).

So it turns out, that what we think, very heavily influences how we feel about things, which in turn, can impact on how we behave.

Let's say for example that you and I both sit for a maths exam and we both score 50%.

You get your exam back and you think to yourself, "Woo hoo! I passed! That's fantastic!" You would feel a lot of lovely feelings and would probably go and celebrate.

If I get my exam back and think to myself, "Fifty percent, I almost failed. I'm stupid and useless", I would feel a lot of crummy feelings and I would probably stay at home and cry.

You can see in this very simplistic example of mine, that we both began with exactly the same situation (A), but we both ended up with two very different emotional outcomes (C). The only thing that differed, was what we told ourselves about the situation - our thoughts (B).

Now I'm going to ask you to look at both of the thought patterns I used in my example, and I'd like you to pull out all of the words that you would say have a positive meaning attached to them? Go ahead, I'll give you thirty seconds.

Chances are, you chose the words that make you feel good: passed and fantastic.

Now do the same thing and find the words that carry a negative meaning for you.

Did you come up with the same ones I did - failed, stupid and useless? You probably did, but it's important to recognise that the this is a very subjective exercise and while there are quite a few words which are globally accepted as positive or negative, there will be situations where some words that don't mean anything to me, might make you the happiest or saddest person on the planet.

It's not the actual word that's important here, it's the meaning that we attach to the word that truly matters.

Even Shakespeare knew that when he wrote this timeless line for Hamlet, "There is nothing good nor bad, but thinking makes it so."

To read more about the ABC Model, check out this awesome resource from the Centre for Clinical Interventions here.

There are several very common unhelpful thinking styles and it is very useful for us to have some idea of which ones we frequently engage with. If we can identify when a thought is helpful or unhelpful we can then make decisions about how much we enter into further 'conversation' with it, if you like. The handout I just provided the link to is a great starting point to learning about your own unhelpful thinking styles. Don't worry, we all have them. Mine are 'Jumping to Conclusions', 'Maximising and Minimising', and 'Shoulding and Musting'. What are yours?

Now, onto the strategies.

These five thinking tools come from Acceptance and Commitment Therapy (ACT) and are based around the idea that hey, sometimes we just need to accept that we are going to have some unhelpful thoughts pop into our head when we least want them to. We aren't always going to be able to stop them, so how about instead, we learn how to deflect them away from our feelings so that at the very least, they aren't going to change our mood for the worst.

The first two strategies are focussed specifically on changing the meaning of the key word in our thought from something serious and catastrophic (let's face it, it usually seems pretty extreme when we listen to these unhelpful thoughts) into something light and humourous. Humour is one of my favourite coping mechanisms anyway, so it makes sense that these two strategies would appeal to me. The idea is that instead of making us feel worried or sad or afraid, being able to laugh at the thought will buy us a split second where we are able to let go of the unhelpful thought and then refocus our attention back onto whatever we were doing beforehand. Mindful grounding can be useful for that. That choice we make to redirect our attention in that split second prevents the unhelpful thought from altering our feelings, in fact, with the laughter, we probably end up feeling better than we were before.

Choose your favourite character from movies, television or anywhere really - but it has to be someone who always makes you laugh, for whatever reason. Now bring up their image in your mind's eye. What are they wearing? Where are they? What are they doing?

Mine is always Sheldon Cooper from the Big Bang Theory. 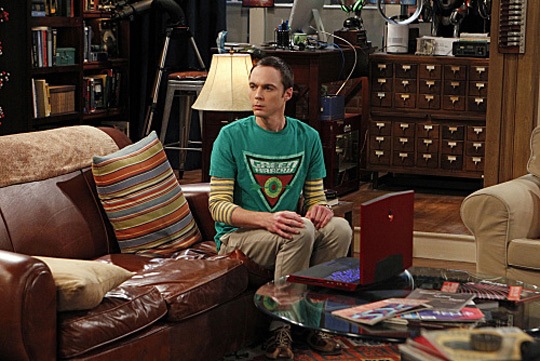 Okay, once you've got their image in your mind, I want you to imagine them looking right at the camera - at you! - and then you're going to hear them, in your mind, say your thought to you, word for word.

Two things happen here: the thought is no longer serious because remember, this person always makes you laugh and no matter what they say - even if it's a terrible thought - it sounds funny; the other thing is that you have just brought yourself some emotional distance from the thought because it's no longer yours, it's theirs now, and so, you can just let it go and refocus your attention elsewhere.

Now we are going to do something similar in the sense that we are going to turn a negative kind of thought into a fun and upbeat, funny thought, this time through singing. Yes, that's right! You are going to sing your thought.

The idea this time though is that you choose a song that always puts a smile on your face. One that makes you want to dance. My go-to song for some reason is from Foghorn Leghorn on the Looney Tunes Cartoons - if you're not sure of what I'm referring to,

The next step is to actually replace the words in the lyrics, perhaps the chorus, with the words of your thought. That's right, you sing your thought to the music and if you're as bad a singer as I am, you will crack yourself up in the process. What usually happens is that you will all of a sudden become a songwriter - think Taylor Swift - and by the end of it you'll have written an entire song and probably won't even remember what your original thought was.

Trust me, even "I am such an idiot" sounds funny when you sing it - especially if you add "doo dah, doo dah" at the end of it!

Go on, give it a go and let us know which songs you used.

Remember when you were a little kid and you liked to just say a word over and over until it sounded like gibberish? Well, you were already practicing a really effective thinking strategy.

Think about it. If we want a word to stop hurting our feelings, surely turning that word into something that sounds like nothing would have to help.

So give it a go. Take the most negative word you can think of, and say it over and over and over, as fast as you can and it won't be long before it doesn't even sound like anything.

The final two strategies for today's article are a little different. They aim to help you regain some control back over when these automatic unhelpful thoughts pop into your mind. Sometimes it seems as though we aren't in control of our thoughts at all, but I'm here to tell you, we are. I believe that sometimes, our very busy and anxious minds are scared that we are going to forget something very important and so, our mind can put that thought on repeat. It goes round and around and around, just to make sure we aren't going to forget that we are stupid/hopeless/toofat/tooskinny/notlikeable/willlikelydiealonewithoutcats.

Luckily for us, there are two very good ways for us to both reassure our mind that we won't forget those very important worries, and at the same time, reduce the frequency with which we have them.

Reassure your mind that you won't forget your unhelpful thought, by scheduling that thought.

Choose an action that you perform maybe four or five times a day and then attach the particular thought, to that action.

For example, everytime I pick up my car keys today, I'm going to have the thought that "I'm going to stuff up my job interview tomorrow."

A couple of things are important here: when you pick up your car keys, always preface the thought with, "I'm having the thought that....." - that way, you won't be tricked into believing the thought is a fact.

The second part is that when you catch yourself having the thought throughout the day when you DON'T have your carkeys, you can say to yourself, "I don't need to have that thought right now. I had it before when I had my car keys and I'll have it again when I pick my car keys up again."

It's amazing how that can reassure your brain that you haven't forgotten its very important (but completely unproductive) message. Once again, this allows you to let go of the unhelpful thought whilst redirecting your attention to whatever it is you're doing.

Last but not least, this strategy also serves to reassure our mind that we won't forget something so important, but that there are other ways of remembering it other than ruminating on it 24/7.

This one is simple. Write it down. Your thought, that is. Write it down or draw it, whatever you like, and then fold it up and put it in your pocket and carry it with you all day long.

When the thought pops into your head throughout the day, you can reassure your mind. "I don't need to have that thought right now. I've got it right here and I'll keep it with me for the rest of the day."

It sounds too simple to work but give it a go, you'll be amazed at how quickly you're able to let go of that unhelpful thought.

As with anything, there is no one-size-fits-all with these strategies. You'll need to try them for yourself to see which work for you. I also recommend trying them on helpful or neutral thoughts first. Practice them. Make them automatic thinking processes in themselves and then try them on the more hurtful and distressing thoughts. You'll have much better outcomes if you do.

There are many books available of these sorts of topics. Check out our Stuff We Like page for some ideas.

As always, we'd love to hear your feedback and answer any of your questions. Don't forget to subscribe to our newsletter that's due to come out at the end of the month! Thank you!

Published in The Coping Toolkit
Tagged under