The Actor & The Psychologist at The Movies - Rocketman 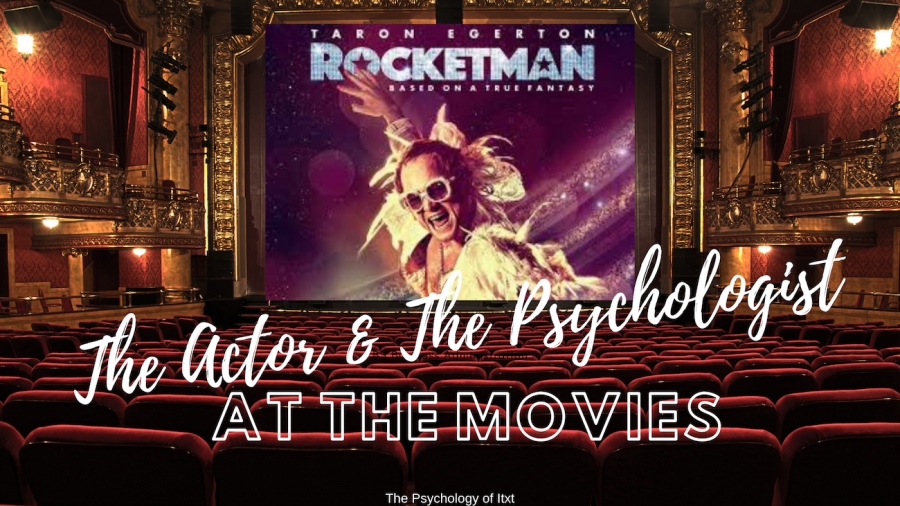 Writers Rocky Hatley, the actor, and Jodie Fleming, the psychologist, met and became friends in the Literary Kitchen, an online writing class taught by Ariel Gore. Bonding over their mutual love of writing and cinema, they join forces to critique movies in a way that only an actor and a psychologist can. Unique and insightful. This is their review of the story of Elton John, Rocketman.

R: Ah, Jodie. When Elton John released "Your Song" here in America in 1970. I became a fan and have been since. So, when I heard that Rocketman would be coming out, I had an inkling that I might like it.

J: Well Rocky, even though I grew up with Elton John’s music, and loved it, I actually considered not seeing Rocketman when I first saw its trailer. If not for an invitation for a girls’ night out at the movies, I might not have seen one of the greatest human tales I have ever seen.

R: You know Jodie, one of the most difficult roles to play is someone in living memory. The successful ones can win Oscars. Sissy Spacek did in 1980 for playing Loretta Lynn. Rami Malek did this past year for playing Freddy Mercury. Two years ago, Gary Oldman won for playing Sir Winston Churchill. I do confess that I'm stretching "living memory" with Churchill. He died when I was seven.

The less successful ones can be embarrassing to behold.

I certainly believe Taron Egerton will receive Academy Award consideration for his portrayal of Elton John. He was that good. As flamboyant as Elton John was during the period covered by the movie, the temptation would have been to go way, way, way over the top chewing up the scenery along the way.

He did no such thing.

J: I think one of things dissuading me from going initially was Taron’s lack of likeness to Elton. Worried I wouldn’t ‘see’ Elton but instead, the actor, I was very pleasantly surprised as the movie progressed, that the character ‘became’ Elton, physically and in voice as well.

R: He brought the flamboyance, no doubt. But he also brought the deep pain brought on by an indifferent father and a cold-hearted mother, wonderfully played by Steven Mackintosh and Bryce Dallas Howard respectively. I have to be honest here. I never would have pictured Bryce Dallas Howard in this role. Not that she isn't a good actor. She is wonderful. But shame on me for doubting her because she nailed it, delivering the coldest line in the movie absolutely straight. One that sent chills down my spine.

Rocketman is a psychologist’s dream movie. We are literally following Elton throughout his drug and alcohol group therapy program for the duration of the movie. There’s so much to admire in the moviemaking of this theme of addiction that plagues Elton’s early career and is so accurately portrayed in this film.

Anyone interested in addiction theories in recent times will have stumbled across Johann Hari who says that, ‘the opposite of addiction isn’t sobriety, it’s connection.’ Well, I had that running through my mind whenever confronted with a scene involving little Reggie (and big Elton for that matter!) and his detached and verbally abusive mother and emotionally absent father likely living with post-traumatic stress disorder after serving in the army. With problematic attachments to both parents (thank goodness for Nan!), Elton sought out deep love and connection but sadly entered unhealthy relationships and turned to drugs and alcohol – addiction – in order to feel good, or to numb the pain. Johann Hari is certainly onto something in the need for love in treating addiction.

I know for you Rocky, you’ll be more focused on the writing and direction of the film.

R: The whole movie began with an amazing script by Lee Hall that effortlessly uses the songs to take us to and through the phases of Elton John's unconventional life.

Dexter Fletcher (Bohemian Rhapsody) certainly knows how to direct a music biopic. He took us all the way from Broadway musical to the depths of booze, drugs, sex, and despair. Beautifully done.

J: So beautifully done. One of my favourite observations was the gradual shedding of Elton’s elaborate costume he wore as he burst through the therapy door. As he shed his defenses, as he peeled back his protective layers and we were allowed inside the man, so too, did the costume, the mask, come off, until there he sat, in a bath robe.

R: I've heard criticism about how this movie is nothing more than yet another successful rise to richesses and fall to booze, drugs, and sex. Those who see it that way don't seem to get that this was Elton John's life. That it was made in a unique way, allowing the songs to tell the story along with the actors and the camera, make all the difference for me.

J: Bernie and Elton’s friendship is one to be envied. It also highlighted the fact though no one can save another until that other is willing to help themselves. Bernie being there at the end of Elton’s treatment is a shining example of what is needed for true recovery. The fact that they remain friends who have never argued, into Elton’s healthy relationship with husband David and fatherhood with their two sons, certainly highlights that friendship as one of Elton’s greatest protective factors.

My absolute favourite moment though, has to be the scene when therapy ends and Elton visualizes all of his key players including his parents, and also little Reggie, who asks Elton, ‘when are you going to hug me?’

What beautiful symbolism that we all need to practice self-love and self-compassion and that the adult version of ourselves can heal and nurture our childhood versions of ourselves in order to accept our past and ourselves.

J: From a psychological perspective, I’m going to give it an 9/10.

We’d love to know whether we got it right! Send us your comments and scores for Rocketman. Let’s see how we did compared to your reviews. And if you like this review, share it with your friends and send us through your recommendations for films you’d like reviewed by The Actor & The Psychologist.

Rocky is a long time member of SAG-AFTRA, and has acted on stage, in commercials, and for film and television. In 2013 he served on the television nominating committee for the Screen Actors Guild Awards. A native of Memphis, Tennessee, he has lived and acted from L. A. to Dallas to Orlando, and considers himself a storyteller whether it be as an actor, writer, or on the six-string guitar. As a baby, he was held in the arms of Elvis, and currently lives in Irving, Texas. He is the author of the novel Catch a Falling Star that touches the Golden Age of Hollywood.

Jodie is an Australian clinical and health psychologist, passionate writer, traveller and lover of life. Living across several states of Australia and also several years in Spain, Jodie has always loved the cinema and counts watching movies as one of her top ten pleasures in life. She has attended psychology conferences and workshops all over the world and recently led a wellness retreat to Bali focussed on conscious living. Jodie has never met Elvis, but once had a doctor who looked a little like him. She has published her first book, a memoir, A Hole in My Genes.

More in this category: « Conscious Living Retreat - the Wrap Up