Conversations on the Couch with Christopher Sewell 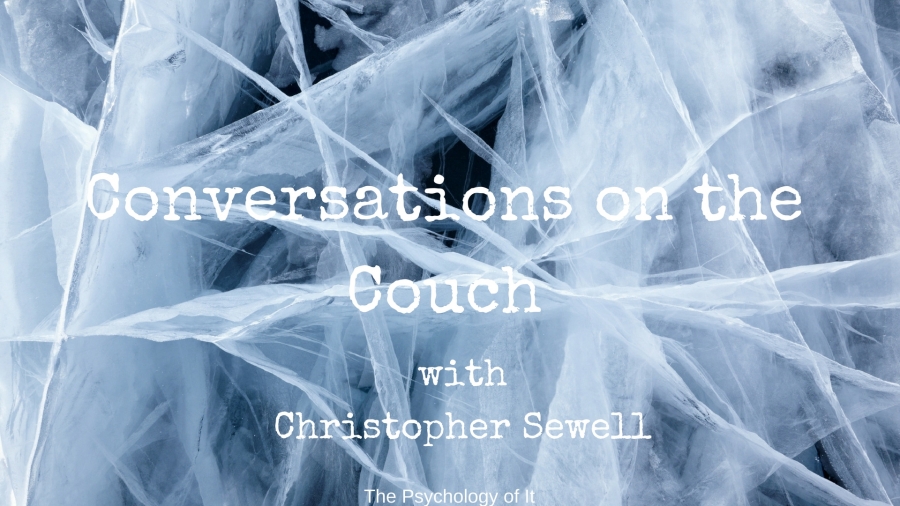 In early September, 2016, we discovered by chance a Facebook post by Christopher Sewell describing in raw detail, his first-hand struggle living with anxiety and depression. Christopher is a husband and a father and a surfer and a mate who is not defined by his disorders. Instead, he is brave and generous and shares this incredible insight into his experiences. 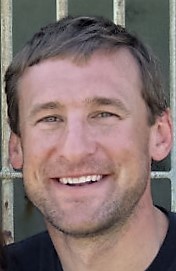 If you could describe your mental illness as a colour/s, what would you say?

If mental illness was a colour? I don't think mental illness can be pigeon holed into a single colour. For me it's too complex for that. I find it to be a swirl of earthy colours - greens, greys, browns and off whites. As time passes colours change, they repeat themselves and even merge together. It's a confusing time. A spiral within a circle (of colour).

Can you tell me perhaps your Top 3 (or 5, or 10!) things you'd like people to say and/or not say when you tell them about your mental illness?

The first thing would have to go at the top of both the top 3 things to say and top 3 things not to say. And that is "Are you ok?". I know that's contradictory , but let me qualify that statement. The days when I thought I had everyone bluffed were some of the days that people most noticed I was struggling. Imagine having your primary school aged children ask if you're ok. Those are the days you don't want to be asked "Are you ok?". And I realise now they're the days you need to be asked this question. After that question, everything else follows.

Which film best describes your experience living with mental illness?

"Fight Club". Although it is essentially a film about mental illness, you don't realise this until the end. You pretend you're something you're not. Days merge into one another and sometimes it feels like you're observing the comings and goings from third person. There is also the premise that until I hit rock bottom or accepted my struggle I couldn't move forward.
If there was a single scene from a movie, it would have to be "Kill Bill Vo.2" and the buried alive scene. While there is no dialogue, the emotion and symbolism of this scene fits perfectly.

Is there a metaphor you use to describe what it's like to live with anxiety that helps other people understand a little of what it must be like for you?

I think the metaphor that best explain both anxiety and depression is that of being trapped under ice.
You do your best to do a balancing act across an unstable terrain. Reassuring yourself that you will be fine. It's just a matter of making it safely to the otherside. Suddenly cracks form. One turns into two, two into four. Then in a instant you're falling quick and hard. No matter how much you try to call out or bang against the underside of the ice, no one can hear you. You're able to see what's happening above, but no one can see you or help you. It's cold, lonely and a struggle that you feel like giving up.

Exercise. Doesn't matter what or how good you are at it. For me, it was both mountain biking and surfing. These things still need to be in moderation. Sometimes I would ride until I could no longer turn the pedals. I would ride to complete exhaustion as some sort of self inflicted punishment.

The other thing that helped was meditation. Not in the way of taking classes or in a structured way, but in managing breathing. I found out I was breathing twice as fast as someone not in my position. It's amazing how much energy is used and worn out you can get from this.

Not dealing with any issue that might arise from day to day. Answering the phone, making decisions at work. Not asking for help because I thought I was useless and worthless. Bottling up frustration and sadness.

Did you receive a diagnosis? Was that useful? Has that changed over time? Was it a straight forward process?

A diagnosis good, bad or otherwise is a great starting point. It helps with the acceptance of what is happening. Until I accepted my situation I don't think I could have moved forward. My depression was diagnosed as being hereditary. Regardless of the reason, knowing there is a reason makes it easier. It is so confusing and upsetting. Why me? I started questioning every decision I have ever made. That's not a good train of thought.

What would you have liked to have known earlier on that may have changed your experience?

The confidence to seek a second opinion is important. As in the different types of depression and anxiety, not every treatment and/or mental health professional is suited to every sufferer. I think people are aware of their right to seek a second opinion. It's having the certainty to follow through. Having family or friends as a sounding board helps alot.

Who has had the most positive impact on you, and your recovery journey? (Do you even like that wording?..recovery).

I don't think there is any one person who has had the most positive impact on myself. I think it's a collection of trained professionals, family and friends. People help in different ways at different times.

There are two words that describe post depression/anxiety that are relevant.

For a percentage of sufferers recovery is the correct word. By identifying and changing unhelpful thoughts and behaviour, Introducing coping mechanisms and strategies and in cases short term medication a person can return to the same point they were at pre depression/ anxiety.

For the remainder I think it's about management. People in this category use all the same tools as those in the recovery, with the exception of prolonged medication use. This could be because of a number of factors. It could be due to the nature of their illness, chemical imbalances, situational factors. No two people are the same. They may be similar, but not the same. 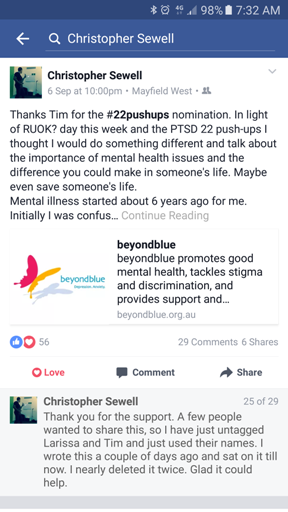 We'd like to say thank you to Chris for this Up Close & Personal account that was all at once moving, raw and insightful. We're sure it will help many people. If you have any comments or questions for Chris, be sure to leave them below and if you have a story to share, feel free to be in touch via the website or email jodie@thepsychologyofit.com.au.