Makeup: The Psychology of It 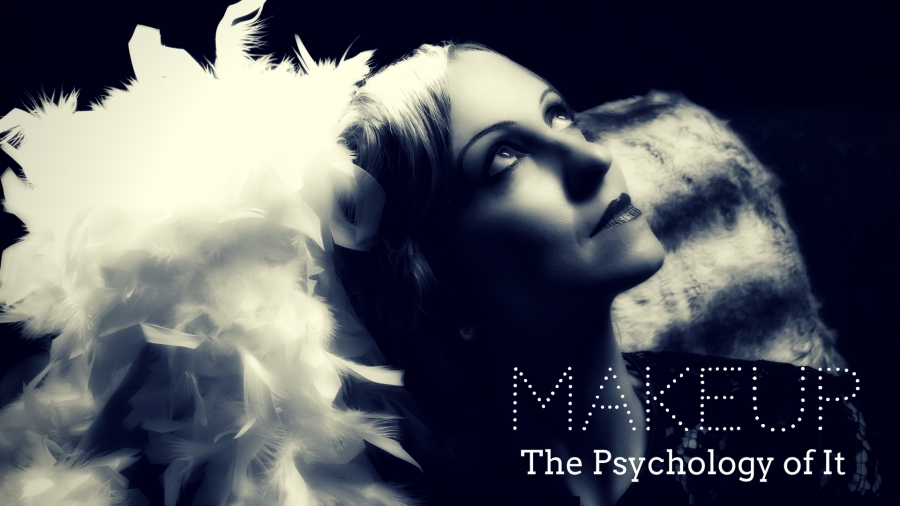 I'm a late bloomer when it comes to being a grown-up. While my friends' handbag collections were growing by the week, I persevered with (stylish) backpacks well into my thirties and when they woke-up an hour early to apply make-up and straighten hair, I prioritised extra sleep!

Genetically blessed, our mother had luminescent, line-free skin right up into her late sixties. She used only soap and water to cleanse her face and wore makeup only if she was going out at night. To work she wore a dash of lipstick and a stroke of mascara and that was it. She didn't need any more.

No surprise then that neither my sister nor I adopted the habit of wearing makeup every day - it just wasn't modelled for us, so as much as anything, I guess we never learnt how to. When I think back to childhood now, sitting and watching mum apply her makeup before going out on weekends became a mesmerising event. Even now I can smell the perfumed foundation, feel the sensation of the makeup brush across my cheek that I'd beg her to do, and see the bright colours of the lipstick she'd apply, sometimes sharing it with us as a special treat. The fact that she only did this on special occasions made it all the more special for us as well.

There have been times in my life where I've questioned my femininity because of my natural appearance. I've spent a lot of money on cosmetics with good intentions of being like 'normal' women and making up my face every day, but the habit never stuck, that is until recently.

If you've followed my recent posts, you'll know that I visited India late last year. The weather is so hot there that I felt constantly saturated with sweat, which wasn't quite as gross as it sounds however, enough for me to be glad to not have to apply makeup on a daily basis!

Our tour group consisted of mostly women and there were two in particular who fascinated me by wearing makeup every single day irrespective of the weather. Not once did they appear as though their faces were melting off and they both looked so composed and together 24/7, I was spellbound. This level of perfection occurred whilst touring around a country where makeup is a way of practising one's religion and culture. It couldn't go unnoticed.

I found myself at the airport in Bangkok on the way home perusing the multitudes of products in the MAC store and before I knew it I left armed with a number of products to apply to my face to look more 'natural'. Oddly, I've worn makeup every day since returning. That in itself is fascinating to me. Why now? It's true, I'm getting older. There are more smile lines than ever before that no longer disappear when my face relaxes, but we all know makeup only enhances those... so I decided to do some reading on the topic. This is what I found:

You'd be surprised how many articles you can find on the 'psychology of makeup'.

There are those articles that talk about the evolutionary aspects of makeup, where our physical characteristics are linked back to reproduction. For women, that means having fuller, redder lips, even skin tone, large eyes and blushing cheeks.

Other articles linked makeup to mental health, mainly through self-esteem and body image, highlighting two opposing functions of makeup - camouflage and seduction. One article suggested that women who associated makeup with camouflage were more likely to be anxious, defensive and less stable emotionally. Where seduction was the objective, women were more sociable, assertive and extroverted.

In one paper, findings suggested that while both men and women perceive women who wear makeup as being of a higher status, men associated it with more prestige while women perceived it more negatively as a sign of dominance and potential threat.

While interesting, none of the research I read seemed to explain my own personal shift to wearing makeup, so I continued my search.

I shouldn't have been surprised to find a link to facial perception, I mean, a single glance at someone's face can tell us information about their identity, their mood, even where they're directing their attention and there are multiple regions in our brain dedicated to reading other people's faces.

Finally, I found some information that made sense to me on the Medical Xpress website. Professor Richard Russell stated that makeup is more related to the 'health' of the face, with healthier looking faces exhibiting more contrast between facial features, evenness in skin colouration, rosier cheeks and more expression - all of which can be enhanced with makeup.

It made even more sense to me when I flashbacked to attending a Look Good, Feel Better workshop whilst in the midst of cancer treatment. The workshops are aimed at giving women some control over looking good when they aren't feeling it. In my experience, missing hair, eyebrows and eyelashes, with a constantly bloated and pale face, looking like a cancer patient made me feel even worse than just the physical effects of the disease. The makeup lesson helped to replace missing brows and give contours and colour to an otherwise puffy face. It changed everything. It made me feel not only more confident with a good boost to my self-esteem, it made me feel as though I looked healthier.

Healthiness is predicated on happiness. We perceive happy people to also be healthier and that's the feedback I've been receiving that's positively reinforced my daily application of a bit of powder, eye-shadow, mascara, blush and lippy.

What are thoughts on makeup? Please feel free to comment below and don't forget to share us with your friends and sign up for our bi-monthly newsletter via the home page. Thanks for your ongoing support!

More in this category: « How Social Connection Rewires the Brain for the Better by Marcus Clarke The Psychology of Claustrophobia »