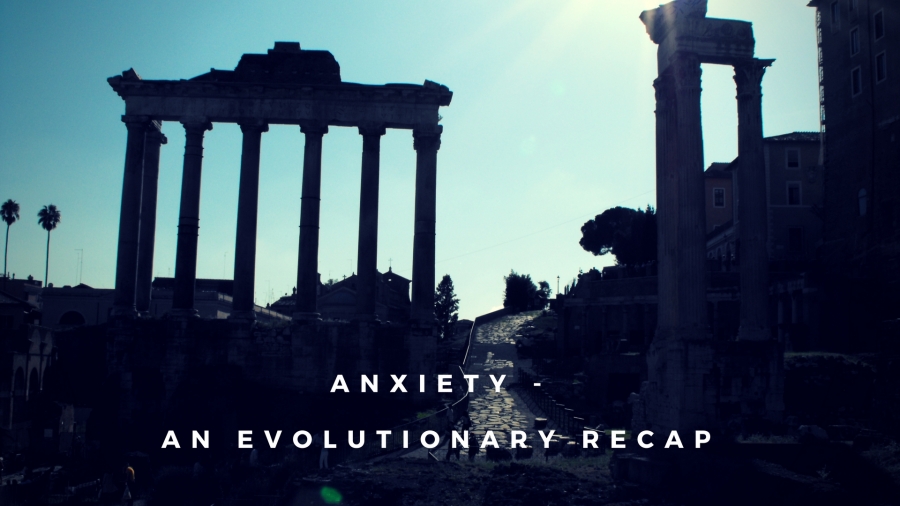 Anxiety as an emotion is as normal as a cycle on your washing machine. Our very survival depends on it, in fact. The sophisticated survival mechanisms in the brain have been around for 250 million years... so how does anxiety end up becoming disordered, as it has for around one in four of us?

Just like an ancient city, steeped in history, our brains contain an 'old town', much like the Roman Forum of ancient Rome which was formed in the early days of civilisation, for example. In the early days, Rome was ruled by kings, who lived in or near the forum, making political decisions impacting on Rome's survival. You could say, this was where Rome lived and breathed.

We can compare ancient Rome to our reptilian brain (which reached its advanced stage of development around 250 million years ago!). First occurring in fish, our reptilian brain is the oldest part of our brain and consists only of two structures - the brainstem and the cerebellum. Much like the centre of ancient Rome, those two structures worked together to control our most basic of functions like our heart rate, breathing, body temperature and balance. It's really reliable but it's also very rigid and compulsive.

After only seven kings, the Romans took power and formed a senate, electing one ruler to lead the senate and to rule Rome. There were more people now having input into the decisions made about Rome's survival and growth as the city began to expand in size, population and power.

We could compare this stage of Rome's development to the evolution of our own limbic system which history sculpted for us around 150 million years ago. The limbic brain emerged in the first mammals and is responsible for our emotions. The main structures in the limbic system are the hippocampus, the amygdala and the hypothalamus. These guys are responsible for the evaluations we make that, often unconsciously, exert such a strong influence on our behaviour, including those involved in our Fight or Flight response to threats. Just like the senate did in Rome. Our brains became responsible for more than just our basic breathing and movements.

Today we visit Rome and we experience a sprawling city that covers around 1,300 square kilometers and boasts almost 3 million residents. It has 19 municipalities, a president and a prime minister, not to mention the sovereign state, Vatican City, within its own city walls. It's a little larger and more complex today than it was at its birth around 700BC.

I'm comparing modern Rome to our very own neocortex which evolved in our human brains only 2 or 3 million years ago. First appearing in primates and later as the two large hemispheres in the human brain, the neocortex is responsible for the development of human language, abstract thought, imagination and consciousness. It's flexible, unlike the reptilian brain, and it has almost infinite learning abilities. It's also what has enabled our different human cultures to develop.

I'm forever talking to clients about the evolution of our brain, but this is the first time I've thought of it like an ancient city with its 'old town' centre and urban development occurring on top of already formed foundations. It makes a lot of sense to me and I hope it is making sense for you too.

You see, I think it'll be easier to understand anxiety, if you have some background knowledge of our brains and how ancient our survival instinct is. If you'd like even more information on brain evolution, check out this documentary called

- it's incredible (and narrated by Liam Neeson!) - warning, it does go for an hour.

In our evolutionary history, the unconscious and faster-than-the-speed-of-light appraisal of threat has had a persistent life-or-death importance - the literal survival of species has depended on it. This history sculpted our human limbic system and the circuitry linking the limbic areas to the neocortex and the hypothalamic-pituitary-adrenal (HPA) axis - each of which is fundamentally important in the experience of anxiety.

In its mildest form, anxiety is a feeling of uneasiness, free-floating distress and worry. As we've said, it's a normal part of the human experience.

The same brain regions involved in anxiety are also responsible for the activation of our Freeze/Fight/Flight survival system. It's important to have a good understanding of our Fight or Flight response and the brain's role in this. I'm going to let Mr Anderson explain this to you in a more animated way via this

- it goes for about six minutes.

In usual circumstances, once the stressful situation or threat passes, so too do the feelings of anxiety.

It's when the anxiety persists without reason, lasting longer periods of time, impacting on a person's ability to function and causing them significant distress that we begin to talk about anxiety disorders. You can read much more about anxiety on the Beyond Blue website.

There are several different anxiety disorders, but the one underlying core emotion common to all of them, is fear.

We'll be presenting individual articles on each of the following anxiety disorders in the coming weeks, including information about how to treat them, but for now, here are some thoughts on the kinds of fears associated with each one.

Here the person worries about many different things, experiencing a general fear that something is not quite right.

With PTSD the fear is episodic and associated with past traumatic events and the fear experienced at the time of that event.

People with social anxiety have an intense fear of being judged, rejected or not approved of by others if they make a fool of themselves. They often worry about situations like public speaking, eating in front of others, or appearing somewhere socially, without having an easy exit from the venue.

Here the fear becomes an obsession about a catastrophe that is waiting to happen if a certain action (the compulsion) is not carried out in a certain way, within a specific time frame.

The intense fear is associated with situations (flying on a plane etc.), sensations (having a needle etc.) or animals/insects (spiders etc.). The fear commonly leads to avoidance of the focus of the fear.

We might even argue that all fears can relate directly back to a fear of death. There's that survival instinct again and an excellent example of how our primitive reptilian brains and limbic systems have sometimes not evolved fast enough to keep up with life in 2016. In social anxiety for example, our amygdala can sort of get stuck, telling us that someone laughing at us when we trip over in front of them is an actual life or death situation - which it's not (unless you hit your head in a bad way perhaps!). The activation of our Fight or Flight response at the wrong times, increases our anxiety exponentially.

Statistics tell us that 25% of the population will experience an anxiety disorder in their lifetime. Anecdotally, I'd estimate that the percentage of my clients who present with anxiety is much higher. Because of this prevalence, it's important that we talk about it. Social anxiety is one of the most common experiences across my caseload and for that reason I'm choosing to begin the individual articles with it.

I'm going to leave you here to process all of this while I start working on the social anxiety article. In the meantime, you can review the Analyse This article on PTSD and the various suggestions in the Coping Toolkit that are useful for managing anxiety.